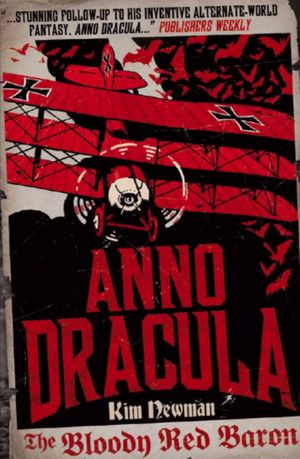 Praise for Anno Dracula: "Kim Newman's Anno Dracula is back in print, and we must celebrate. It was the first mash-up of literature, history and vampires, and now, in a world in which vampires are everywhere, it's still the best, and its bite is just as sharp. Compulsory reading, commentary, and mindgame: glorious." - Neil Gaiman "Politics, horror, and romance are woven together in this brilliantly imagined and realized novel. Newman's prose is a delight, his attention to detail is spellbinding." - Time Out “Stephen King assumes we hate vampires; Anne Rice makes it safe to love them, because they hate themselves. Kim Newman suspects that most of us live with them… Anno Dracula is the definitive account of that post-modern species, the self-obsessed undead.” - New York Times “Anno Dracula will leave you breathless... one of the most creative novels of the year.” - Seattle Times “Powerful... compelling entertainment... a fiendishly clever banquet of dark treats.” - San Francisco Chronicle 'A ripping yarn, an adventure romp of the best blood, and a satisfying… read' - Washington Post Book World "The most comprehensive, brilliant, dazzlingly audacious vampire novel to date. 'Ultimate' seems an apt description... Anno Dracula is at once playful, horrific, intelligent, and revelatory." - Locus "A marvelous marriage of political satire, melodramatic intrigue, gothic horror, and alternative history. Not to be missed." - The Independent "Once you start reading this Victorian-era thriller, you will not be satiated until you reach the end." - Ain't It Cool "Anno Dracula is the smart, hip Year Zero of the vampire genre's ongoing revolution." - Paul McAuley "Kim Newman brings Dracula back home in the granddaddy of all vampire adventures. Anno Dracula couldn't be more fun if Bram Stoker had scripted it for Hammer. It's a beautifully constructed Gothic epic that knocks almost every other vampire novel out for the count." - Christopher Fowler "The most interesting take on the Dracula story... to date. Recommending this one to all those that love Dracula and historical fiction!" - RexRobotReviews — WAR IS HELL... It is 1918 and Graf von Dracula is commander-in-chief of the armies ofGermany and Austria-Hungary. The War of the Great Powers in Europeis also a war between the living and the undead. Caught up in the conflict, Charles Beauregard, an old enemy of Dracula, his protegé Edwin Winthrop,and intrepid vampire reporter Kate Reed go head-to-head with the lethal vampire flying machine that is the Bloody Red Baron... In the brand-new novella Vampire Romance, Geneviève Dieudonné,newly returned to England, infiltrates a singular vampire gathering in the service of the Diogenes Club. A brand-new edition, with additional novella, of the critically acclaimed, bestselling sequel to Anno Dracula. Written by popular novelist and movie critic Kim Newman, The Bloody Red Baron takes the story into the 20th century.